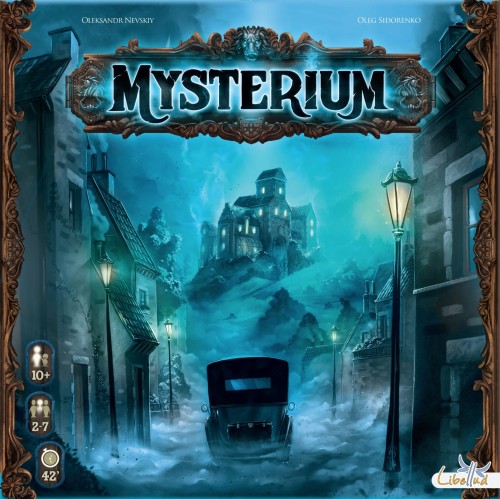 Welcome to the haunted manor of Mysterium!

In the 1920’s, Mr. MacDowell, a gifted astrologist, entered in his new house when he immediately detected a surnatural being. Gathering  eminent mediums of his time for an extraordinary seance, they will have  7 hours to contact the ghost and investigate to unlock an old mystery…

Unable to talk, the amnesic ghost will communicate with the mediums through visions (illustrated cards). They will have to decipher the images to help the ghost remember how he was murdered (who? where? which weapon?). The more they cooperate and guess well, the easier it will be  to the catch the right culprit.

In Mysterium, a reworking of the game system present in Tajemnicze Domostwo, one player takes the role of ghost while everyone else represents a medium. To solve the crime, the ghost must first recall (with the aid of the mediums) all of the suspects present on the night of the murder. A number of suspect, location and murder weapon cards are placed on the table, and the ghost randomly assigns one of each of these in secret to a medium.

This party game is one of the most anticipated games of 2015, thanks to innovative, thrilling and immersive features. It offers cooperation and investigation with an asymmetrical gameplay. While playing the ghost or a medium, you will have fun trying to guess what other players have in their minds!

So enter in this strange manor and let yourself be led by your intuition! 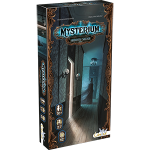 Mysterium: Secrets & Lies consists of six new characters, six new locations, six new items, and 18 story cards. This latter group of cards can replace the object cards in the game, with each card representing one way in which the ghost died.