Welcome to the Cosmic Age. The open skies of countless worlds are filled with speeding spaceships, and a panoply of lien races is competing to populate the galaxy. Will your own people choose to occupy undefended worlds, create peaceful and diverse alien civilizations, or ruthlessly conquer others' territory? In the quest to colonize as many planets as possible, there are as many paths to victory as there are alien races seeking it. Peace, war, negotiation, betrayal—you never know what will happen in the next encounter.

Cosmic Encounter is a game of interplanetary colonization and cunning negotiations for three to five players. Each player takes on the role of the leader of a unique alien race seeking to colonize as many planets as possible away from your native system. The first alien race (or races) to colonize five planets in other players’ systems wins. Of course, even planets that are not yet colonized are still defended, and in order to establish a settlement, you’ll need to win over the alien race that controls that planet—through negotiation, partnership, or war.

The core set includes fifty alien races, each with its own history and powers. You may be the leader of the genteel and thieving Filches, sensitive and oozing Amoebas, sneaky, infesting Parasites, or self-sacrificing Kamikazes. Your powers may enable you to quickly travel through space, prevent your defeated ships from falling into the Warp, or allow you to look at another player's hand before you decide your next move. Each alien has individual strategic tools and a specific play style that shapes all of its encounters—and in fact, the entire game.

Cosmic Encounter offers you and your fellow aliens several variants for gameplay. Should you desire, a game can be shortened or lengthened by requiring fewer or more colonies. Tech cards can be integrated, which give each player a specific objective. Once accomplished, the Tech card becomes a useful asset that you can use later in the game. Players could also choose to conceal their alien powers until the moment they are used, or rotate which alien races they control and become a new alien every round.

Amass your fleet, form your alliances, and dive into the vast galaxy of this classic game! 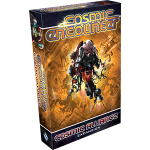 Cosmic Alliance is the third expansion for Cosmic Encounter, and it brings 20 alien races, both original and classic, exploding onto your tabletop.

In Cosmic Conflict, the expansion for Cosmic Encounter, 20 new alien races explode onto the galaxy!

The galaxy is trembling in Cosmic Storm, the newest expansion for Cosmic Encounter. With twenty-five new aliens and thirty-five new cards, Cosmic Storm adds more variety than ever.

Designed for the fans and by the fans, Cosmic Dominion is a must-have for anyone hoping to explore all that the game’s cosmos has to offer!

Cosmic Eons, an expansion for Cosmic Encounter, introduces new aliens with abilities unlike any you’ve dealt with so far, but it doesn’t stop there.

Over the years, alien empires have risen and fallen. The Vacuum has failed to eliminate the Zombie, the Virus has spread far and wide, and the Loser has turned defeat into victory. 50 different species have tried to conquer the galaxy, and each have made their mark on the universe. Their warring has not gone unnoticed. 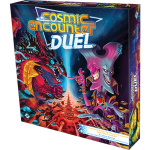 Challenge your closest frenemy to the fast-paced hilarity of Cosmic Encounter Duel!