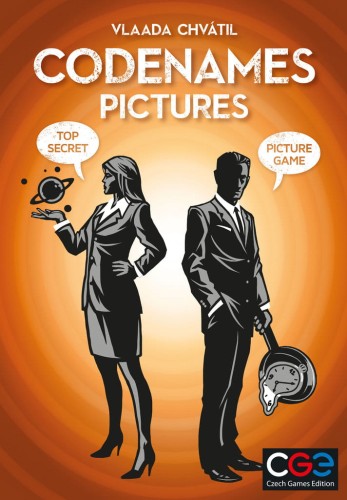 What are these strange symbols on the map? They code for locations where spies must contact secret agents!

Two rival spymasters know the agent in each location. They deliver coded messages telling their field operatives where to go for clandestine meetings. Operatives must be clever. A decoding mistake could lead to an unpleasant encounter with an enemy agent – or worse, with the assassin! Both teams race to contact all their agents, but only one team can win.

Codenames: Pictures uses similar mechanics to the original game, but with a few differences:

The 280 black-gray-white pictures have been carefully picked and designed for interesting game play. The pictures usually contain two or more elements that create witty combinations, tell interesting stories, leave some space for imagination, while still being relatively simple for good playability. They are the work of great artists like Tomáš Kučerovský (Codenames, Galaxy Trucker), David Cochard (Alchemists, Dungeon Petz), and others.

The two rival spymasters know the secret identities of 25 agents. Their teammates know the agents only by their CODENAMES.