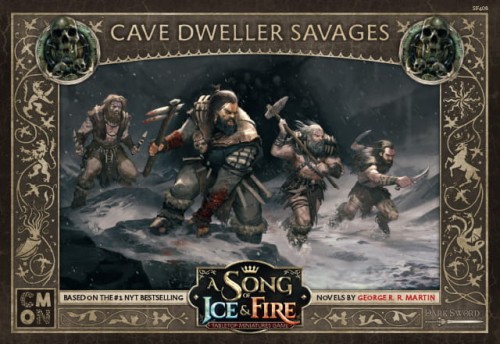 The Free Folk are often framed as simple savages by those that live further south. In many instances, that evaluation is wrong. While the Free Folk don’t harbor the trapping of much of civilization, they are not simply savages. The Cave Dwellers, though… they are simply savages.
The Cave Dweller Savages Unit Box gives Free Folk commanders a new option on the battlefield. While the unit is armed simply with scavenged weapons they’ve found along the way to the battle, and are clothed in not much more than ratty old skins, they are still fearsome on the field, wading into combat with wild abandon. To further their fury, there is the Cave Dweller Alpha Unit Attachment, who can enhance the combat prowess of any unit they join.

A Song of Ice & Fire: Tabletop Miniatures Game Starter Set - Stark vs. Lannister has everything needed for two players to fight epic battles. Containing forces for both House Stark and House Lannister, players build their armies, select leaders, construct their Tactics Deck, and engage in one of five different Game Modes.

A Sturdy Bulwark Against Incoming Attacks. The great Houses of Westeros had many other, Houses that paid fealty to them. These bonds could be quite strong, reinforced by marriage. When House Stark sent out its ravens to call their Bannermen, House Tully was quick to lend their arms to the cause.

Even the lowliest Lannister soldier has shining armor and weapons. Of all the Great Houses of Westeros, there is none more wealthy and ready for war than the Lannisters.

The Cutthroats of House Bolton have a reputation that follows them onto the battlefield and drives fear into the hearts of those they face.

Loyalty to yourself above all others can save your life in a battle. One thing remains true for the unaligned forces in the War of the Five Kings, whether they’re fighting for coin, self-interest, or simple survival, they always remain true to themselves. They are a wild card that can be added to any army in the game. 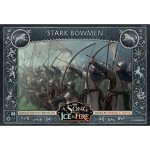 In battle, the goal is to defeat your opponent without being defeated, yourself. If you can attack your enemy and they cannot retaliate, that goes a long way to victory. For House Stark, that means employing skilled bowmen in their ranks. They have trained relentlessly in their everyday lives as trappers, rangers, and hunters. Now, they form up and send out steel-tipped death to the foes of the Direwolf.

A trait that is often undervalued in war is flexibility. Sure, an army needs its specialists. Ones who can lead a charge, or hold back an assault, but a Unit that can do a little bit of everything is priceless when they step onto the field. The Umber Greataxes are that Unit for House Stark.

A Song of Ice and Fire: Tabletop Miniatures Game - The Warrior's Sons

A Song of Ice and Fire: Tabletop Miniatures Game - The Warrior's Sons

The Warrior’s Sons unit box gives Lannister players a righteous arm out on the battlefield. These highly-skilled and well-equipped soldiers are an avenging scythe, cutting down those who oppose them and using their faith to bolster themselves during combat, gaining Faith tokens that they can use for different bonuses and abilities.

The Free Folk Trappers Unit Box gives Free Folk Commanders a new option for their armies. Lightly armed and armored, the Trappers are well-versed at harrying tactics. Able to deal wounds directly to enemy units via their Hidden Traps order, they can greatly disrupt an opponent’s plans. And being Insignificant, they aren’t worth victory points when destroyed, allowing Free Folk Commanders use them more dangerously, without worrying about giving them up to the enemy.