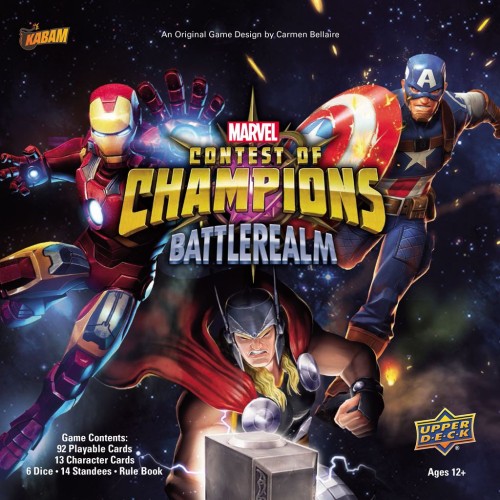 Choose your Champion, Enter the Contest! Inspired by the critically acclaimed mobile game, Contest of Champions: Battlerealm is a game of combat, strategy, and chance. Choose one of 13 fan-favorite Marvel champions, including Contest of Champions exclusives like Guillotine and Civil Warrior, roll the dice, and carefully allocate your ISO-8 to power up your champion and attack your opponents, travel to new locations, or activate powerful special abilities. Make every game unique in this fast-paced combat game as you battle your champions across 40 different locations!

So you want to know who you can play in our new Marvel Contest of Champions Battlerealm game? It’s an awesome line up of all your favorite Marvel heroes, from skilled hand to hand combatants like Black Panther and Captain America, to blasters like Captain Marvel and Vision, to real powerhouses like Iron Man and the Hulk, and many more. There is a hero for every play style.

Maybe you like a to play a hero that excels at the long range game and kiting his opponents around the locations, like Hawkeye, or maybe you want to be mobile like Falcon, it’s all up to the hero you pick.

The Battlerealm for our new Marvel Contest of Champions game consists of 40 location cards, only some of which you will use during a single game. The locations you can battle over are amazing, from the Arcane Arena to the Wakandan Necropolis, from the Avengers Tower to the Savage Lands. Each Battlerealm location has a separate PVP reward that a champion earns for moving to that location and a special ability that can be used by champions beginning their turn at that Battlerealm location.