Zamknij
Logowanie / Rejestracja
Dodatki do gier Legend of the Five Rings: The Sword and the Spirits 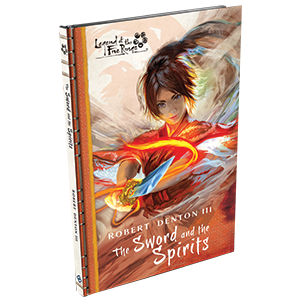 Legend of the Five Rings: The Sword and the Spirits

Rokugan. A land where honor is stronger than steel. Here, the samurai of the seven Great Clans serve the Emperor as warriors, courtiers, priests, and monks. They live—and die—by the tenets of Bushidō.

Shiba Tsukune wasn’t supposed to become the Champion of the Phoenix Clan, but their ancient sword chose her. Trained as a samurai warrior, she was to be the bodyguard of Isawa Tadaka, a powerful shugenja—and the man she loved. Although her new duties have drawn them apart, she refuses to stand by and watch as Tadaka falls to the darkness within him.

Tsukune follows Tadaka north to Cliffside Shrine, home of the Kaito family, where he must investigate the mysterious death of a prominent priestess. All around them, the shrine shows signs of decay and desecration, and the wards that have bound an evil demon for centuries are fraying. What secrets are the Kaito family keeping? And can Tsukune save Tadaka from descending down a dark path before it’s too late?

The Sword and the Spirits focuses on the Phoenix Clan’s investigation into a mysterious elemental disturbance and the secrets of a vassal family in the mountains. Sent to investigate a murder, Isawa Tadaka and Shiba Tsukune stumble upon an ancient conspiracy.

At over 100 pages, The Sword and the Spirits is the deepest dive into Legend of the Five Rings lore yet, and will be released alongside Disciples of the Void, the Phoenix Clan Pack for Legend of the Five Rings: The Card Game. In addition, you can learn more about the mysteries of the Phoenix and explore the land of Rokugan from the viewpoint of the most mystical Great Clan—not only with the novella, but with a full-color insert detailing the history of the Phoenix Clan, the Kaito family, and its darkest secrets.

The Sword and the Spirits will also feature two alternate art cards for Legend of the Five Rings: The Card Game!

The first, Kaito Kosori,  is an alternate art version of a card debuting in Disciples of the Void, and marks the first time a character from the Kaito family makes an appearance in Legend of the Five Rings: The Card Game. Kaito Kosori honors her family’s tradition of skill with a bow while also exemplifying the Kaito family’s mystical elements. While you are participating in an air conflict with at least one character, Kaito Kosori can contribute her skill to the conflict from your home area—essentially giving you a free skill boost to tip a conflict in your favor. Furthermore, as a Shugenja, Kaito Kosori synergizes well with the multitude of Spells found in Disciples of the Void.

The Sword and the Spirits also features an extended art version of the iconic Ofushikai,  the sword that chose Shiba Tsukune as Phoenix Clan Champion. Ofushikai offers guidance to its wielder, which can only be one of your unique Phoenix characters, and it grants a powerful ability when it's wielded by a Champion. As an Action during a conflict in which its wielder is participating, you may move a participating character home and prevent them from attacking for the rest of the phase! Since Ofushikai contains the Ancestral keyword, it will be a constant presence on your battlefield, and it's an attachment that your opponent will always have to beware: for both its skill boost and its ability.

Ofushikai is not included in Disciples of the Void, and is instead a preview of things to come. Because of this, Ofushikai will not be legal for Legend of the Five Rings: The Card Game tournament play until it is officially released in an upcoming Dynasty Pack later this year.

Legend of the Five Rings: Across the Burning Sands
54,00 zł
dostępne