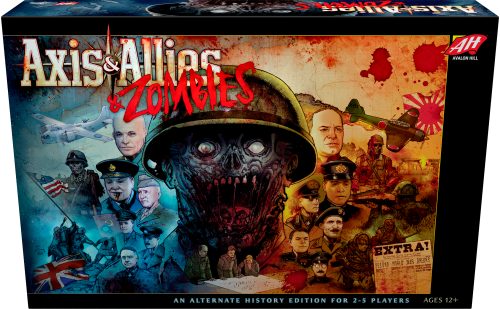 A deadly new force threatens to take over the world! Can you bring your side to victory while surviving the rising tide of zombies?

It is 1941, and the world is at war. The Axis war machine is crushing everything in its path, while the Allies are rallying together to mount a heroic stand.

And then zombies show up.

As the commander of one of the five major powers, you are charged with planning a strategy to win the war. But each battle provides more fresh corpses for the flesh-eating hordes, and the problem is getting out of hand. With your human enemies on one side, and the ravenous undead on the other, it is time to ask yourself, “Do I invest in tanks or chainsaw tanks?”

Also includes an 80-card expansion deck for the Axis & Allies 1942 board game!

To celebrate the 50-year anniversary of Avalon Hill, Axis & Allies is launching its most expansive game ever

Axis & Allies D-Day is designed for two or three players and can be played in two hours.